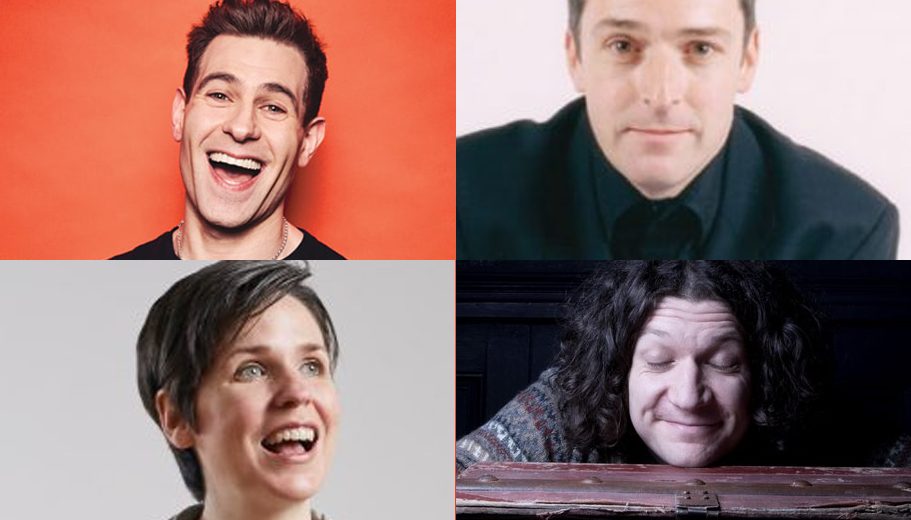 Named “the world’s most famous blagger” by The Daily Telegraph, untameable prankster and acclaimed character comedian Simon Brodkin has hit global headlines multiple times for his high-profile stunts. Most famously he handed Prime Minister Theresa May a P45 form during her keynote speech at the Conservative Party Conference and showered disgraced FIFA president Sepp Blatter with hundreds of dollar bills in bribe payments “for the North Korea 2026 World Cup bid”.

King has a wealth of experience on the national comedy circuit, with over 20 years of gigs in top UK clubs, theatres, Arts Centres and at Festivals. He’s as much at home with a quiet listening audience as he is in the bustle of a rowdy club and has a set full of punchlines.

McCabe has been gigging on this side of the Atlantic for several years after starting her comedy career in NYC. She also performs with improv troupe ComedySportz Manchester and regularly appears on Fab Radio’s The Gay Agenda and on Gaydio’s The Exchange. When she’s not working, she enjoys comic books, Playstation, snacking, and naps.

Our compere for the evening is Ben Van Der Velde; a stand-up comedian, actor, improviser and presenter who, over the past few years, has spread joy and nonsense to all four corners of the British Isles.

Age Guidance
Over 18s only

Social distancing measures will be in place, and these will be emailed to ticket holders prior to the event.