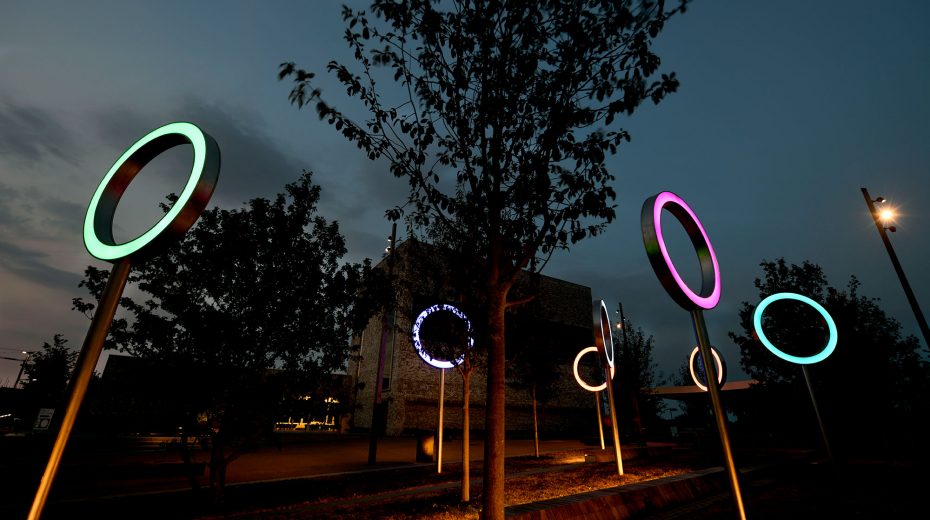 Richard Of York Gave Battle In Vain, by David Batchelor, is a contemporary and striking Public Art sculpture in Community Square outside the Storey’s Field Centre at Eddington that has just been unveiled

The sculpture is made up of seven free-standing discs which are brightly lit with LEDs; at any one time each of the seven discs will correspond to one of the seven colours of the colour spectrum.

As well as providing a focal point for the public space, each of these discs is also a rudimentary clock. At any one point a disc will show a single colour, but over the course of an hour it will slowly move through the entire spectrum – red, orange, yellow, green, blue, indigo, violet – returning to its starting colour on the hour.

Each ‘clock’ will have a different starting colour – red, orange, yellow, green, blue, indigo or violet – so no two discs will ever be the same colour at the same time, but they will also be in a state of constant but barely perceptible change, like the minute hand of a clock.

Richard Of York Gave Battle In Vain is inspired by Cambridge scholar Sir Isaac Newton’s colour circle. In 1704, in his pioneering work on optics, Newton divided the visible light spectrum into a circle of seven distinct colours: red, orange, yellow, green, blue, indigo and violet. This colour order is often memorised by the common mnemonic ‘Richard Of York Gave Battle In Vain’, providing the name of the piece.

The programme aims centre on a thorough understanding of place, developing a distinctive identity for Eddington and the North West Cambridge Development and setting a standard for public art that has the potential to be a benchmark for best practice nationally and internationally.

David Batchelor is an artist and writer based in London. His work comprises of three-dimensional structures, photographs, paintings and drawings, and it mostly relates to a long term interest in colour and urbanism.

Project Director Heather Topel said: “David Batchelor’s work is a wonderfully fun and colourful addition to Eddington. We hope it will make Eddington’s residents, visitors and wider community smile when they stroll through Community Square or enter the Storey’s Field Centre. The ambition for the Public Art programme for the development is to foster a sense of pride and community and Richard Of York Gave Battle In Vain is a striking part of that.”

Artist David Batchelor said: “It has been a privilege and a pleasure to make a work for the North West Cambridge Development and in honour of Sir Isaac Newton, who’s work on optics and colour has been a source of inspiration to me for many years.”

Other examples of the artist’s work can be found at www.davidbatchelor.co.uk. You can download a free self-guided walking tour map of Eddington here.