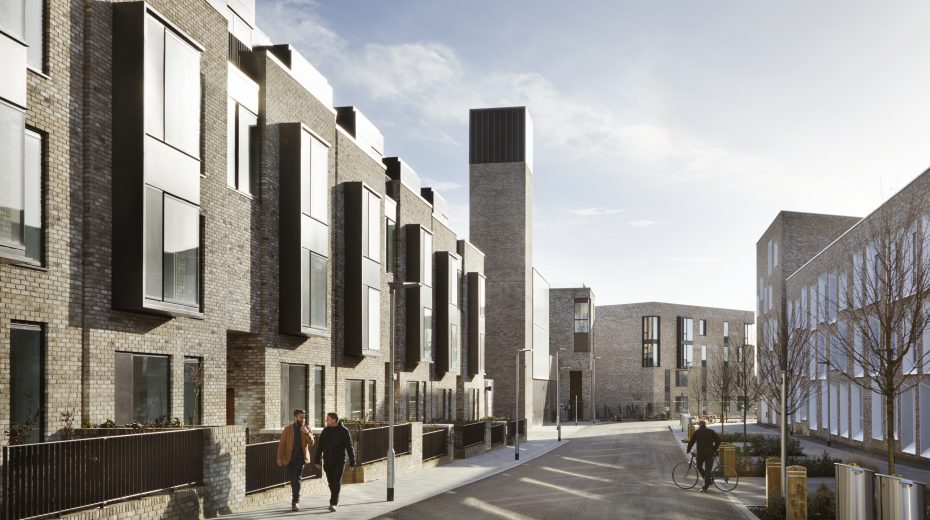 The Royal Institute for British Architects (RIBA) has given three national awards to the North West Cambridge Development for outstanding designs and masterplanning at Eddington. The national prizes come after receiving regional awards earlier in the year.

Buildings at Eddington were recognised for their ability to combine functionality with form and embracing both traditional approaches to urban living with modern looks.  Judges also noted the development’s emphasis on environmental features like recycling, water and energy saving, as well as public spaces.

The national RIBA awards highlight quality architecture across the country with winners then considered for the coveted RIBA Stirling prize.

The prizes were awarded for the overall masterplan developed with AECOM, the sports pavilions and utility buildings designed by Robin Lee Architecture, and residential, energy centre and retail units designed by architects Wilkinson Eyre and Mole.

All three winners at Eddington were praised by the jury. The RIBA judge’s statement said:

“This development has risen to the high aspirations that had been set in the brief, and has achieved the status of ‘exemplar’ for new developments. Many of the pioneering features of sustainable communal living explored in Eddington are desperately needed in the twenty first century. It is a worthy extension of the national tradition for creating new towns.”

Heather Topel Project Director of the North West Cambridge Development said: “We are delighted to receive these three national awards. It is another major achievement recognising the quality, sustainability and design of Eddington, and the thought and consideration that goes into creating a new community.”