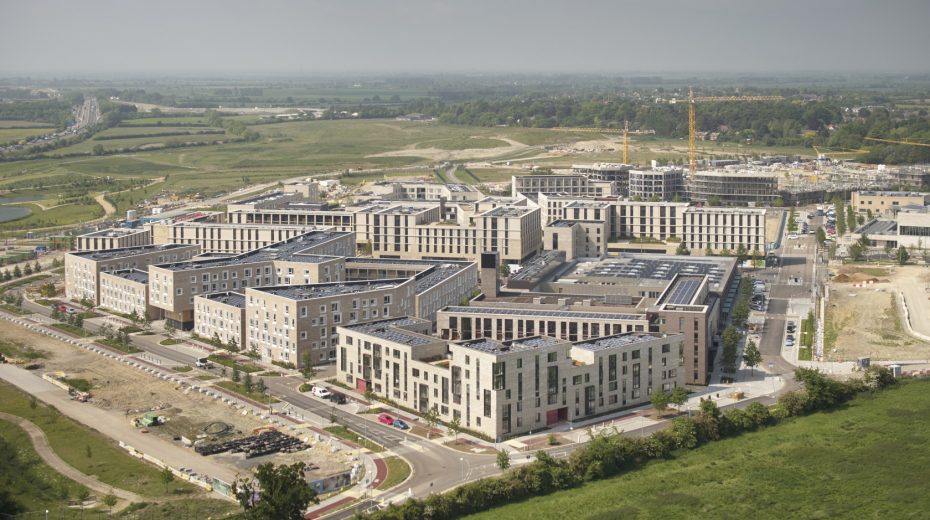 Two awards were given the University of Cambridge’s North West Cambridge Development at the Eastern region’s Royal Institute of Chartered Surveyors awards: Eddington won the best Residential award and the Development won the coveted Project of the Year.

A new district in Cambridge, Eddington comprises 700 homes for key University staff, Swirles Court – a post-graduate student complex for 325 students, and facilities to support the local community, including the Storey’s Field Centre, University of Cambridge Primary School, Sainsbury’s supermarket, parklands, play areas and sports fields, as well as infrastructure to support connectivity for the development.

Eddington opened in Summer 2017 and has currently has a population of approximately 600 people.  It is the largest single capital project that the University of Cambridge has undertaken in its 800-year history. The development provides affordable housing for University key workers and much needed housing for the wider Cambridge community in an environment that boasts highly sustainable living.

Heather Topel, Project Director of the North West Cambridge Development said: “We are thrilled that Eddington has been recognised by the RICS as a significant housing development and as Project of the Year in the region against the high standards in the competition. At a time when house-building is a priority regionally and nationally, the University is setting high standards of quality design whilst also considering the importance of developing strong and sustainable communities.”

The judges awarded the scheme Project of the Year because the University is admirably tackling the affordable housing challenges in the city whilst creating a mixed community, incorporating quality and sustainable homes for University key workers and the wider community.

The University’s unique position in the local community affords a long-term perspective to placemaking at the North West Cambridge Development. By delivering key social infrastructure at the outset including the University-sponsored school (which opened in September 2015), a local centre with shops and a supermarket, community centre, sports pitches and parklands, the University seeks to establish a vibrant district where community spirit flourishes and is integrated into the wider community. As an exemplar of sustainability, the development pushes the boundaries on a development of this scale, and will be built site-wide to BREEAM Excellent and Code for Sustainable Homes Level 5.

The Project of the Year accolade was awarded to the best winner from the evening’s winners including: Apple Tree Farmhouse in Chorleywood for the Building Conservation category; One Station Square in Cambridge for the Commercial category; Glenwood School in Benfleet for the Community Benefit category; Aerospace Integration Research centre in Cranfield for the Design through Innovation category; International Aviation Academy in Norwich for the Regeneration category; and the Naze Education and Visitor Centre in Walton-on-the-Naze for the Tourism and Leisure category.