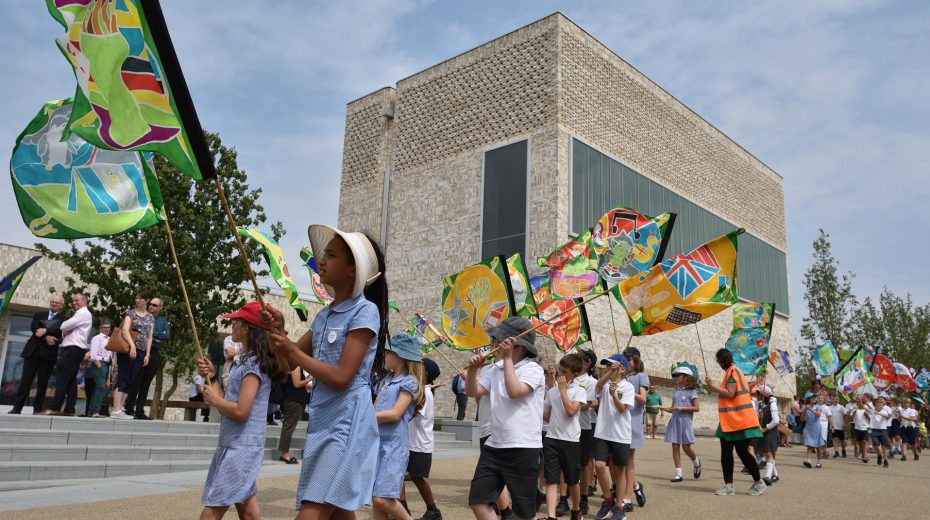 Storey’s Field Centre celebrates its official opening with a stunning flag parade by local school children and representatives from local government and the University of Cambridge.

The official opening was attended by 100 representatives from the University of Cambridge, Cambridge City Council and South Cambridgeshire District Council, alongside the wider community. The highlight of the opening saw over 160 children parading around Eddington, sashaying to Brook Leys, the new lake and parkland before returning to the Storey’s Field Centre for a community afternoon which included family friendly activities including face painting, sports, archaeological displays and music. In the evening, Cambridge super-group, Cath Coombs and the Awesome Soul Collective rounded off the day of celebrations playing some of the best loved soul and funk classics.

Richard Brown, Storey’s Field Centre Manager said, “The flag project and opening events will help to build lasting partnerships with local schools, artists, and the wider community. We hope that these partnerships will develop further as more people discover and explore both the community centre and Eddington.”

Flying the flags for the Centre

An architectural gem for the community

The Storey’s Field Centre is a landmark building at the heart of Eddington and has been awarded a national award from the Royal Institute of British Architects (RIBA).

The Storey’s Field Centre fulfils a social and cultural role for residents at Eddington, as well as the wider Cambridge community. The beautiful single-storey building – which has a main hall and two multi-purpose rooms – was specifically created to meet a wide range of uses, including community activities, performing arts and private events. The acoustics for the main hall can be adjusted to suit various events, from a film screening to a chamber music performance. It has already hosted music events, toddler groups, woodcraft gatherings and weddings as well as many more.