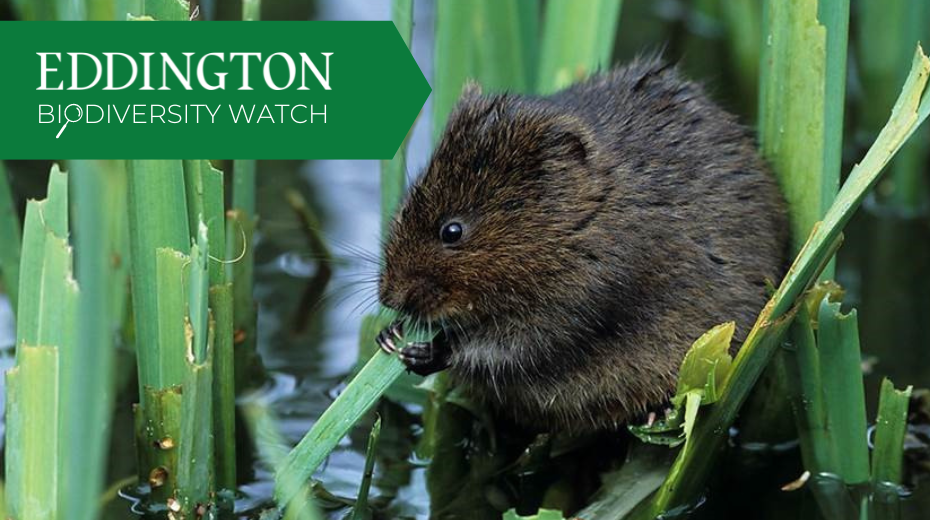 Project Ecologist, Mike Dean focuses this blog on the water voles who have made a return to this area through the design of the lagoon and wetlands at Brook Leys.

Water voles are one of the most rapidly declining mammals in the UK.  The decline of water voles, a once common and widespread species, was identified in the late 1980s and early 1990s, with a national survey estimating a loss of up to 90% over the course of the 20th century.  A review by the Mammal Society in 2018 suggested a further 50% decline since 1998.

A very small colony of water voles were recorded on the Washpit Brook at Eddington in the early 2000s, but these had been lost from the site well before development commenced, probably because there wasn’t enough good quality wetland habitat to support them.  A key target of the Biodiversity Strategy for Eddington then, and a focus of the design of the lagoon and other wetland areas, was the encouragement of the return of this species.

And over the last few years Eddington has become home, once again, to a population of water voles.  In fact, Eddington supports far more water voles now than it did back in the early 2000s.  They are present throughout the lagoon, where they use the reedbeds and tall vegetation around the margins, dominated by species such as reed sweet-grass and yellow flag.  This provides both food and cover for them.

There is plenty of other wetland habitat around Eddington for them to expand their population into, including some of the permanently wet swales and a new channel excavated in the Western Edge of the site between Brook Leys and the M11.  They are also making use of parts of the Washpit Brook, which is likely to be an important link between the water voles on site and populations further north at Girton.  And water voles have now also colonised some of the ponds in the local area, including the one at Madingley Road Park and Ride.

Water voles breed from around April to September or October when they mark their territory with collections of droppings known as latrines.  Look carefully in the vegetation around the margins of the lagoon, within a few centimetres of the water’s edge, and you may find those latrines, or you might spot piles of chopped up vegetation that they have been feeding on, often neatly cut at a 45 degree angle.  And if you’re very lucky you might spot one of the animals themselves tucked in amongst the vegetation that it’s eating, or swimming a slightly ungainly looking doggy paddle across the surface.

Another species to look out for this month is the swift.  There are dozens of birds flying over the lagoon and the buildings within the centre of Eddington.  They are fast, acrobatic fliers and have a piercing screaming call that lets you know they’re around.  I watched five or six birds checking out a series of nest boxes in mid-July.  I haven’t seen or heard of them nesting at Eddington this year, so these birds might be prospecting for a suitable nest site for next year.  Fingers crossed!

The other birds at Eddington in the headlines at the moment are the pair of swans at Brook Leys.  Still with one cygnet in mid-July, these birds seem determined to go on walkabouts around Eddington and then find themselves suffering in the heat rather than returning to the lagoon, possibly because the male has a damaged knee.  Luckily lots of local residents have been keeping an eye on them, and staff from a local wildfowl sanctuary have helped get them back in the lagoon when needed.