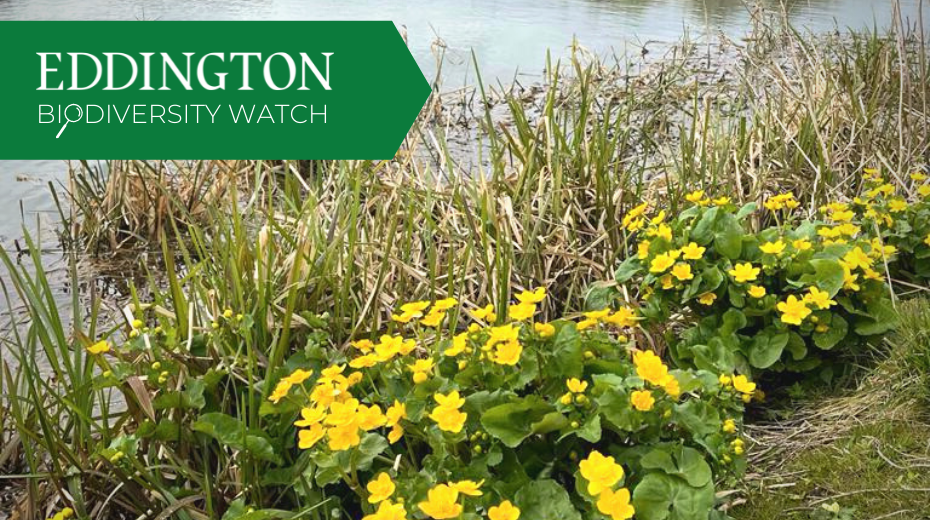 With this month’s blog article, the Project Ecologist, Mike Dean, invites everyone to take a closer look at the flowers blooming at Brook Leys and the various birds species that can be found at Eddington.

Spring has definitely arrived at Eddington. Head down to the lagoon at Brook Leys and you’ll see some obvious signs.

The grasslands are dotted with the subtle yellow of cowslips and along the water’s edge, the more vibrant yellow of marsh marigold dominates.

Several pairs of coots are busy building their nests around the margins of the lagoon. Little grebes and tufted ducks have also paired up and are likely to start nesting soon if they haven’t already.

Another species currently setting up breeding territories around Brook Leys is the chiffchaff – a species of warbler that is quite easy to identify.
Look for a small olive-brown bird high up in the trees repeatedly shouting its name at you.

Two other species likely to appear over the coming months are reed buntings and reed warblers.

Both species have nested at the lagoon in previous years, as well as at other ponds on site. Until recently reed buntings were ‘Red Listed’ as a species of highest nature conservation concern. They have made something of a recovery across the UK, and also appear to be doing well at Eddington. Both species have increased in number on site as a result of the development.

Other species which have been recorded on site since construction commenced, or appear to have increased in number, are kestrel, little ringed plover, lapwing, tawny owl and kingfisher.

As you walk around the centre of Eddington you may notice that bird boxes have been built into the exterior walls of many of the buildings.

Some of these are more obvious than others. Over 100 boxes have already been installed with many more to follow.

The boxes are particularly aimed at encouraging house sparrows, starlings and swifts. All three species have been recorded at Eddington, but we’d be particularly interested to hear of any records of these species (or any others) nesting in the boxes.

Swifts are likely to arrive in the UK at the end of April, having made a 6000 mile journey from Africa.

We’re so keen to encourage them to nest at Eddington that we’ll be playing swift attraction calls from some locations over the next six months. Let us know if you spot any!