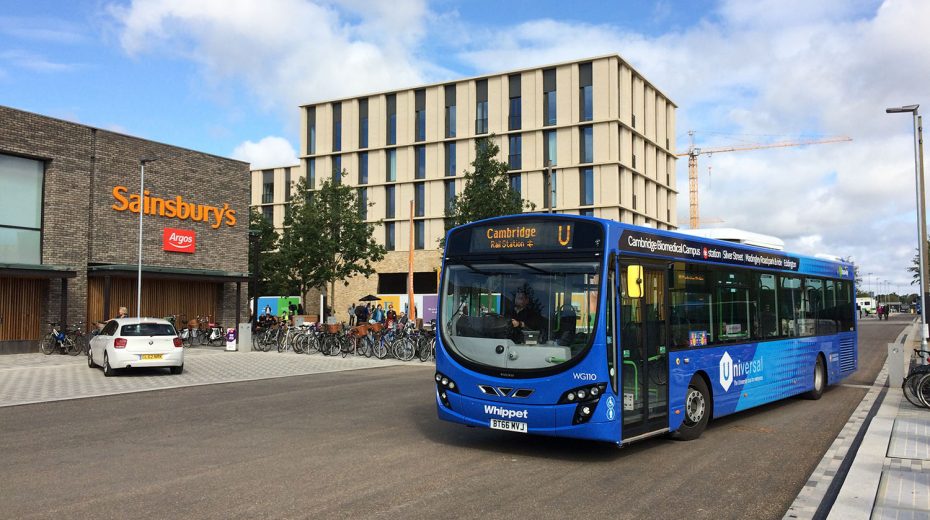 The Universal bus service links Madingley Road Park and Ride and the new community of Eddington with West Cambridge, the railway station and the Cambridge Biomedical Campus (including Addenbrooke’s).

The Universal bus service was launched on 23 July 2016. It runs every 15 minutes Monday to Friday and every 20 minutes on Saturdays, and is operated by Whippet on behalf of the University of Cambridge.

In its first year of operation, the Universal saw a 49% increase in journeys compared to 2015-16, when the service was known as the Uni4 and was operated by Stagecoach.

Since Saturday 8 September 2017, the service has commenced its route at Eddington rather than at Madingley Road Park and Ride. Users of the Park and Ride can still access the bus service via a footpath to the Universal bus stop on Eddington Avenue.

The improvements in the bus service have benefitted both the University and Cambridge as a whole, helping to increase the sustainable transport options available for people living in, working in and visiting the city. 55 per cent of journeys are made by University staff and students, and the remaining 45 per cent of journeys are made by other Cambridge users. The most popular boarding and alighting locations are the Cambridge Biomedical Campus, Cambridge Railway Station and West Cambridge.

This data has been derived from the following sources: